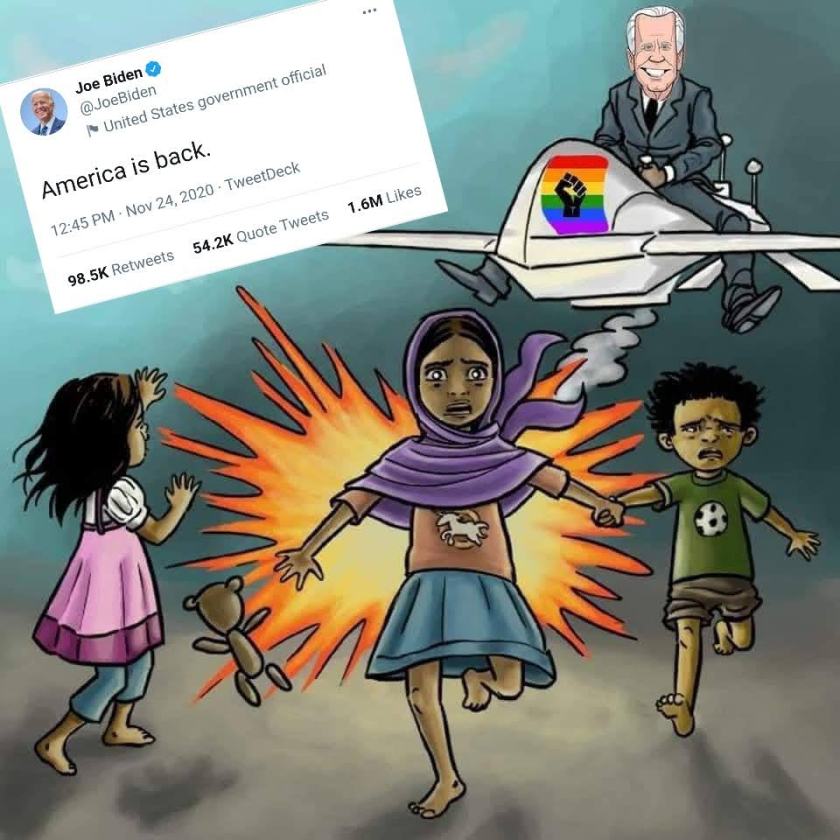 On Thursday it was reported that the Biden Administration bombed Syria per the requests of the President. Joe Biden approved the attack in retaliation for alleged previous Iranian-backed militia attacks on US forces in Iraq, according to Reuters.

According to local sources in Syria, the number of people who died from the air strikes was at least 17, but that number hasn’t been verified.

The Pentagon’s Spokesman John Kirby confirmed the Syria Strike with a statement:

“At President Joe Biden’s direction, U.S. military forces, earlier this evening launched airstrikes against infrastructure utilized by Iranian-backed militant groups in Eastern Syria. These strikes were authorized in response to recent attacks against American and coalition personnel in Iraq, and to on-going threats to those personnel. Specifically the strikes destroyed multiple facilities located at a border control point used by a number of Iranian-backed militant groups including Kait’ib Hezbollah and Kait’b Sayyid al’Shuhada. This proportionate military response was conducted along with diplomatic measures, including consultation with coalition partners. The operation sends an unambiguous message: President Biden will act to protect American and coalition personnel. At the same time, we have acted in a deliberate manner that aims to deescalate the overall situation in both eastern Syria and Iraq.”

A week earlier in the February 15th attack rockets hit the U.S. military base housed at Erbil International Airport in the Kurdish-run region, killing one non-American contractor and wounding a number of American contractors and a U.S. service member.

Rockets on Monday hit Baghdad’s Green Zone, which houses the U.S. Embassy and other diplomatic missions. However, The Kata’ib Hezbollah group denied taking part in any of the attacks.

It remains unclear why President Biden made the decision to attack only Syria and not Iraq if the conflict was not with Syria.

The report of this story feels a lot like déjà vu all over again where an ally’s country or property is attacked, yet the people accused of doing the harm deny the allegations as the media condemn them without evidence.

If you recall, back in June of 2019 Iran was accused of allegedly air-striking a Japanese ship oil tanker in the Golf of Oman. Despite the fact that the Iranian government, some European countries and even Japan denied that the attacks were conducted by Iran, the right and left wing mainstream media continue to push the narrative and wanted President Trump to retaliate against Iran. Secretary Mike Pompeo was on the front lines appearing on Fox News affirming the narrative; However, President Trump did not take action unlike President Biden on Thursday with Syria.

It is no secret that the Washington D.C. establishment is salivating for blood in the Middle East. They have been pushing for endless wars that have only ended in the destabilization of the Arab nations which has created a mass refugee exodus where the United States then brings in millions of hostile foreigners. President Trump changed that reality by pushing for Israel and the Arab countries to make peace. Trump also attempted to pull out troops from Syria, but the Pentagon went against his orders.

According to a Washington Post report published October 2019, Pentagon officials were unhappy with Trump’s decision to withdraw troops from Syria and instead appealed the idea by convincing the President to leave at least 200 troops behind to prevent ISIS from taking over the oil.

“This is like feeding a baby its medicine in yogurt or applesauce,” one US official familiar with the deliberations said.

In November 2020, James Jeffrey, a then US special representative for Syria engagement, gave a bombshell interview with Defense One about how top US military officials from the Pentagon had lied and misled the President about the real number of troops that were left in Syria. Although the Pentagon and the Trump administration agreed to leave between 200 to 400 troops, the real number that was kept in Syria was around 900. During his interview, Jeffrey admits to being a “never Trumper” in the beginning where he even signed the infamous “Never Trump” letter. Jeffrey changed his opinion on the President after witnessing his Middle East policies that brought them stability. Jeffrey also encouraged then President- Elect Biden to stay the course laid out by Trump’s team. Some things the Biden team may want to undo — like the dismantling of the Iran nuclear deal — he suggests may now be impossible. But above all, don’t attempt “transformation.” Don’t try to “turn Syria into Denmark.” Stalemate is stability. “I think the stalemate we’ve put together is a step forward and I would advocate it,” Jeffrey said.

Unfortunately it seems as though President Biden did not get James Jeffrey’s memo and will carry on the legacy of Former President Obama of starting new wars in the Arab nations as ISIS or new incoming terrorist groups rise to power.