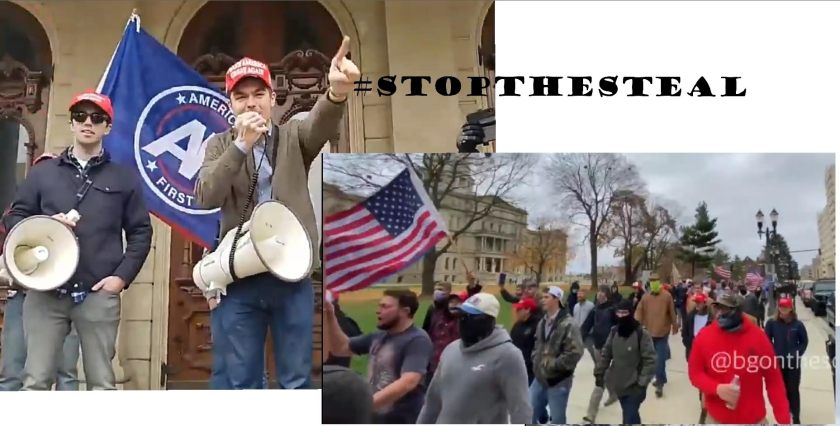 Lansing, MI- A movement on the rise of mostly young men from the Zoomer generation are leading pro-Trump protests around the Nation. Today, the group who call themselves “Groypers” with an America First agenda are not giving up their support for the President. Their goal is to step away from the keyboards and instead make their voices heard on the streets.

The man leading the march this Wednesday is a young man by the name of Nicholas J. Fuentes (22). Fuentes is a right wing conservative host of the most popular show on Dlive.tv called “America First” where he speaks of current political and social events. This week he has been very active on organizing protests on every state’s capitol. And of course, the mother of all marches is peeking around the corner for the Million MAGA March on Saturday 14th where Nick J. Fuentes, the Groyers, and hopefully more than a million Trump voters will show up in D.C.

On Wednesday while they were at Michigan, the young America First patriots stood at the capitol building speaking to their audience. They then marched around the building where they begin their patriotic journey by singing the Stars Spangle Banner, national anthem, followed by chants such as “Fox News Suck,” “We want Trump,” “America First,” and “Christ is King,” to name a few.

While they made their way around the capitol building, the group of young men came across another group of Catholic protesters who were also in favor of President Trump. The Catholic group was perhaps people who follow Dr. Taylor Marshall, a Catholic Theology Professor from Texas who has also instructed his followers to go to their state’s capitol, protest, sing, and pray the holy rosary for at least seven days straight.

"We must take up space! Let people know we are Catholic and we love America" -TM

Nick J. Fuentes is also a traditional Catholic that wants to help the younger generations who have been poisoned and brainwashed by Hollywood, pornography, public schools and the news to come back to our Christian values that made this country great since the beginning.

“They’re counting on people, and specifically you Trump Supporters, to stay in their houses and complain about it online. They thought that that’s what we would do. They thought that we would stay at home and tweet about it and post about it on Facebook and they’d censor us there. And then they’d get away with it. But we’re not remaining in our homes. We’re on the streets now!” Said Fuentes during his speech followed by cheers and applause from the crowd. “And,” Fuentes continued, “We’re in front of the state capitols and we are not leaving until the state legislature allocate their electoral votes for President Trump for another four more years!”

After the amount of cheering and chanting “Four more years” in reference to another Trump victory, Nick Fuentes continued, “Michigan is Trump country. The United States is Trump country. And we are going to get another four more years. But this is critical… right now we’re seeing liberals celebrating their perceived victory. We know that the mainstream media called the election for Joe Biden on Saturday. The mainstream media does not decide who gets to become president.”

Below is part of the speech Nick J. Fuentes gave, but you can also watch the full stream at https://dlive.tv/p/volitil+0o_6j3hMg

This has been one of the most modern day uphill battles that conservatives have faced, especially since most of the current communication and activism is done via social media. We have been conditioned to depend on technology for far too long to the point where we have given full control to big tech. As of today, sites such as Facebook, Google, Youtube, Instagram, Snapchat, Tik Tok, Twitter and all the usual Silicon Valley suspects have been censoring posts and taking down any pages that organize against Covid lockdowns or share the Million MAGA March/March for Trump events. The most recent violator of the first amendment right that allows us to peacefully assemble is Eventbrite.

Eventbrite is an electronic site that allows people to organize events. However, while they promote left wing social justice events all over their social media such as “Educate yourself: Virtual Racial Equity Workshop,” they take down the “March For Trump” rally. They not only took down the March for Trump event, they also took the time to fabricate and attempt to sabotage the pro-Trump march for this Saturday by emailing the people attending and stating that the rally had been cancelled. This is what Nick J. Fuentes meant when he said “They’re counting on people, and specifically you Trump Supporters, to stay in their houses and complain about it online. They thought that we would stay at home and tweet about it and post about it on Facebook and they’d censor us there. And then they’d get away with it.” What big tech has not realized is that the “The Sleeping Giant” cannot be stopped once it has awaken. And we are wide awake.