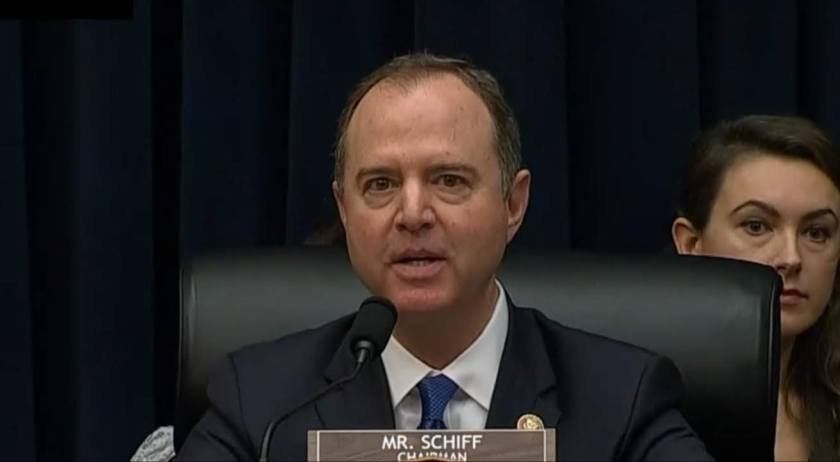 On Thursday, the House Intelligence Committee met for the first time since the Mueller Report concluded the Russia collusion investigation where the Special Counsel found no evidence of collusion. A four page summary was submitted by Attorney General William Barr exonerating the President from colluding with the Russian to rig the 2016 elections as well as no obstruction of justice.

Republicans saw the opportunity to call out the inappropriate behavior from the House Intelligence Committee, Adam Schiff, who continue to affirm that there were collusion between President Trump and the Russians regardless of Mueller’s exoneration. Not only did Republicans exposed Adam Schiff’s incompetence to serve in the Intelligence Committee, they also asked for his resignation as chairman.

Congressman Adam Schiff, who spent two years knowingly and unlawfully lying and leaking, should be forced to resign from Congress!

Democrat Rep. Adam Schiff responded to the President by posting a clip of the hearing on his Twitter feed.

I say this to the President, and his defenders in Congress:

You may think it’s okay how Trump and his associates interacted with Russians during the campaign.

During  the ongoing Russian Collusion investigation, Rep Adam Schiff was one of the most vocal congressman who continuously declared on the mainstream media that he had enough evidence to believe that the Trump campaign colluded with the Russians against Hillary Clinton. During the dramatic confrontation between Schiff and Republican, the chairman once again said that Donald Trump Jr. colluded with the Russians on behalf of the President.

If Adam Schiff has any evidence, he had over two year to turn it in to the Special Counsel. Otherwise, Schiff is defaming a sitting president and will continue to do so. If he is about to publicly life repeatedly to the American, how does he prove any competence for an important position as a chairman for the House Intelligence Committee. Or worse, how can we trust that a sitting powerful congressman is not capable of lying about any other American? Congressman Adam Schiff should resign for abuse of power and lack of trust.