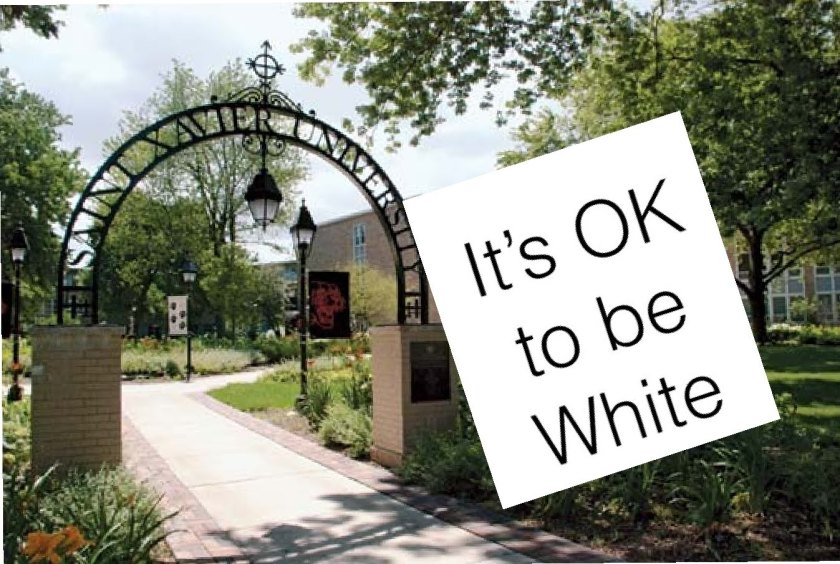 On March 20, 2019, the St. Xavier University in Chicago emailed their students informing them about an incident that the staff considers to be a racist act. The Chicago Police Department were contacted to investigate and find out who posted stickers with the phrase “It’s OK to be White.” A student from the university, who wishes to remain anonymous, contacted The Patriotic Pundits to share their perspective on the matter.

“When I saw the email, I thought it was funny that someone would place the signs in a liberal school in Chicago,” he said, “I don’t think its racist, but I do feel disappointed by the staff’s reaction for calling the slogan racist. What is racist about ‘It’s OK to be White?’ I am White and I find it okay to be me. I didn’t choose to be White and find it offensive that I am not allowed to feel comfortable in my own skin. I did not place the stickers, but I still find it funny and ridiculous that the cops were called for something so absurd as stickers that hurt someone’s feelings.”

The email sent by the President of the University Laurie M. Joyner stated the following:

Stickers stating “It’s OK to be White” were found posted in two of the men’s restrooms on campus March 18. When discovered, Public Safety was contacted to investigate, and the stickers were removed immediately. Public Safety has shared the incident with local police departments.

Diversity is one of our celebrated core values at Saint Xavier. This calls us to condemn racism in any form and support everyone in our community regardless of race, religion, ethnicity, socioeconomic statues or country of origin. We are stronger as a community for our diversity and strive to create a campus environment where differing ideas may be freely expressed and debated.

On Friday March 22nd, The Patriotic Pundits reached out to the university for comments and spoke with Tony Campbell, Vice President for Student Affairs and Dean of Students. Mr. Campbell gave us a brief summary of the incident and stated “St. Xavier does not tolerate hate in any form” and will continue to work on improving it’s core values. When VP Campbell was asked if he considered the stickers as a free speech he responded, “We are a private institution and as Catholics the phrase used by white supremacists goes against our values.” No one was hurt physically by the people who posted the stickers; However, the staff is concerned that the stickers with the phrase “It’s OK to be White” did hurt the students emotionally.

The Chicago Police have not followed up with the university with any updates on whether or not the individuals have been identified. Mr. Campbell is inclined to think that the suspect(s) may be male as three stickers were found in the men’s restrooms.